For Thai-Son Kwiatkowski, coming to Virginia was always part of the plan. The North Carolina native has a lifelong involvement with the UVA community, coming to the Lawn for the first time when he was just three years old. Thai said, “Both my parents went here as well as my uncle…I have been coming to UVA football and basketball games since I was really young. It has been a dream to be a part of this community.”

Thai and his teammates won their third-consecutive NCAA Team Title in 2017, their fourth in the last five years. In less than a week, he was crowned the 2017 NCAA Men’s Singles Champion. He credits this incredible success to hard work and an unbeatable team culture. Thai said, “The feeling of winning is increased tenfold because of the process we went through and how close our team is. It is something really special that I’ll cherish the rest of my life, and I’ll be best friends with all these guys forever.” 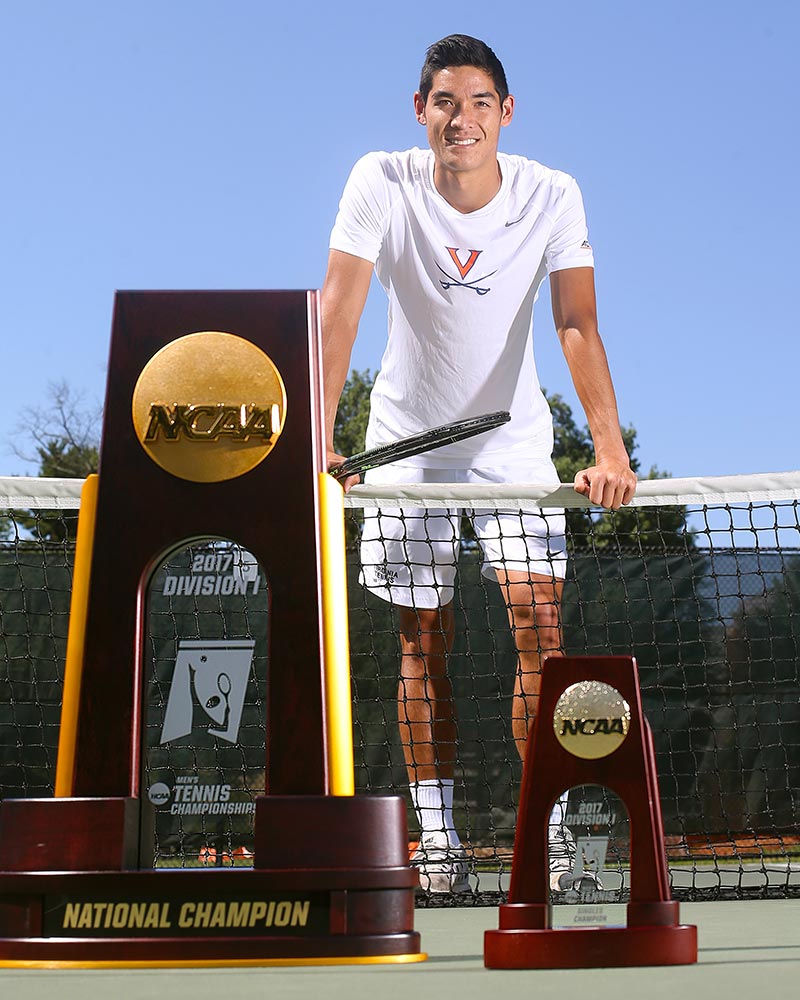 THAI PICKED UP HIS FIRST TWO PROFESSIONAL WINS after the 2016 National Championship. First, partnering with his then-teammate Mac Styslinger to win the ITF $25,000 Charlottesville Futures Doubles Championship followed by a win at the ITF $25,000 Winston-Salem Futures.

Off the court, Thai managed a busy schedule as an Information Technology and Management major in the McIntire School of Commerce. As a student in the highly competitive business school, Thai enjoyed the small classes and relationships he developed with faculty members and his classmates.

With his long list of athletic and academic accomplishments, Thai has established himself as a leader both on and off the court. He served as a member of the Student Athlete Mentor (SAM) Council, leading fellow student-athletes to discuss ways to encourage responsible and healthy behaviors throughout the athletic community and student body.

For his fourth year, Thai was honored at the 2016 All-Sports Banquet as recipient of The Downing Family Endowed Tennis and Leadership Scholarship. When given the opportunity to thank the VAF and his donors, Thai said, “I’ve been able to meet a lot of our supporters off the court and to have relationships with them is really motivating to continue to work hard and perform my best on the court. I am forever grateful for their support.”

Donor contributions to the VAF Annual Fund support student-athletes such as Thai-Son in many ways including scholarships, the Athletics Academic Affairs program and sport-specific operational budgets.