Kat Young, a redshirt sophomore on the volleyball team, hails from Chantilly, a large suburb in Northern Virginia. Kat’s drive for competition is accredited to her upbringing and hometown. She said, “Northern Virginia is a very competitive environment and all of the kids in my classes, since I started school, were extremely smart and involved in multiple sports and activities. Everyone was constantly working to outwork the person in front of them.” 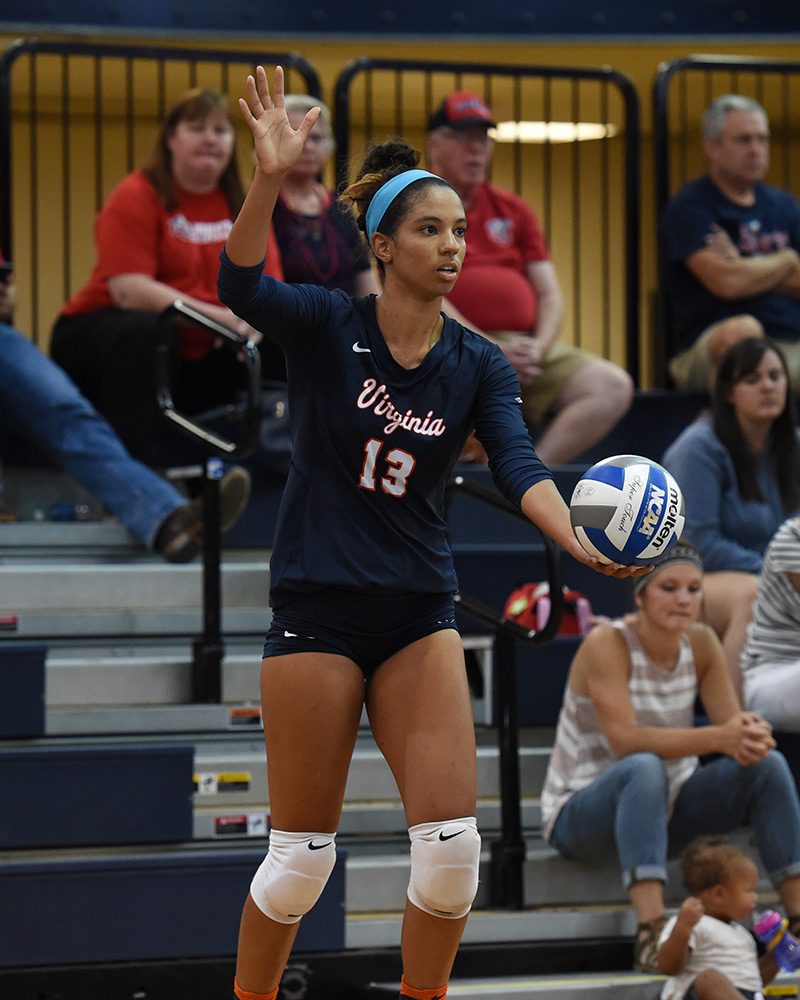 While at Virginia, Kat has earned several awards and honors that include being on the ACC Honor Roll every semester and a member of the National Society of Collegiate Scholars. One of the more prestigious accolades that Kat has received is The Bob Olderman Student-Athlete Scholarship. The donors made their donation in honor of their nephew who was a football player at UVA and an excellent student-athlete. The scholarship is awarded to someone that represents the ideals that Bob Olderman embodied. On receiving this scholarship, Kat explained, “It’s an honor to be selected in memorial to such an admirable person. It’s easy to get caught up in the grind of schoolwork and athletics, but it’s also nice to take a step back to realize that things have been going well and the work is paying off.”

Besides athletics, Kat likes to involve herself in various activities on Grounds and service work. This past summer, she was an Orientation Leader. As an Orientation Leader her goal is to serve as a guide for new students making the transition to the complexities of UVA. She is also a member of Student Athlete Mentors. In this program, she learns useful skills and works to improve the lives of student-athletes at the University. Being a student mentor has helped her realize how complex the role of a student-athlete is on and off the court. One of the most meaningful things she has been able to do in recent years is work with young volleyball players and the Special Olympics. In providing her perspective, Kat said, “It’s really refreshing how excited younger players are about the game and getting recruited to go to a school they love. With both groups there is a direct impact and it is evident through the enthusiasm that the kids show and their attendance at our games and volleyball clinics.”

As a student at UVA, Kat is majoring in Computer Science in the College of Arts and Sciences, and is still deciding on an Economics or Statistics minor. With this major, she hopes to become a software developer. When asked about this career goal, Kat said, “I love coding. I think it would be really cool to develop applications, but I feel like there is also lot more to do with coding that I have not explored yet.” Before she begins her life as a software developer, however, Kat wants to follow her long-time dream of playing volleyball professionally overseas. “I would love a new adventure and I do not want my volleyball career to end after my redshirt senior year.”

When given the opportunity to thank the VAF and donors, Kat said, “I am so thankful for the donors and their contributions to my experiences here at UVA. It’s nice to know that people have my back and are supporting me and other student-athletes.”

Donor contributions to the VAF Annual Fund support student-athletes such as Kat in many ways including scholarships, the Athletics Academic Affairs program and sport-specific operational budgets.